Remember our friends, J & A? And the baby shower I threw for them back in November? Well they’ve barely been in their new home for four weeks and guess who decided to make his way into the world two weeks early? Yep, their baby BOY! Isn’t he so cute?!

Everyone is healthy and happy and doing great. Under his little cap is a full head of blonde hair. Just look at those cheeks! Congratulations, J & A! Nice work ;)

Even though the flu has been going around like CRAZY, Hubs and I have managed to steer clear of the bug. Otherwise I wouldn’t have gotten to hold that sweet baby! I haven’t even had a sinus infection or a cold. Last year was the first year I didn’t get a single sinus infection (I used to get one every spring and fall). A mere coincidence? I think not. Since going vegan nearly a year ago, this is the healthiest I’ve been in years. Many people (myself included) believe that dairy increases mucus production. Others disagree. Personally, I think it has a great deal to do with the fact that I’ve been clear of sinus infections. That, and the good ol’ neti pot. I swear by that thing. If I get even the slightest sinus headache (usually from weather changes), I bust out the neti pot. It’s awkward to use at first, but it WORKS.

For those of you who think dairy is the world’s only source of significant calcium, you’re wrong. In fact, soy milk has just as much calcium as skim, 2-percent and whole cow’s milk. Which means soybeans are loaded with calcium. So are oranges, kale, oatmeal, sesame seeds, almonds, broccoli, white beans, dried figs, turnip greens, arugula, sunflower seeds and tofu. If you’re feeling phlegmy, consider cutting out dairy for a week and stocking up on these other calcium sources. I’ll bet you’ll notice a difference.

What does all of this have to do with Carrot Cake Protein Bars? Um, nothing. But you’re gonna LOVE these things.

I found this recipe on one of my favorite blogs, Healthful Pursuit, which is written by a very smart and seemingly very happy Canuck named Leanne Vogel. Leanne is a holistic nutritionist who shares her love of whole foods and healthy living through her blog. She’s really great at converting traditional (typically unhealthy) recipes into allergen-friendly, healthy alternatives… without compromising flavor! Check out her impressive recipe page – this girl’s got SKILLS! You’ll find a wealth of other really great information related to healthy eating/living on Healthful Pursuit, too.

I’m happy to report that these bars are AMAZEBALLS!!!!!!! Hubs and I both LOVED them. They are surprisingly very moist even though they are oil-free. And they’re sweet, but not too sweet. The original recipe called for four eggs, so to make them vegan I used Ener-G Egg Replacer, which is also gluten-free. The recipe also called for coconut butter to be drizzled over the top of the bars. I thought I had this ingredient, but I didn’t – so I whipped up a naughty powdered sugar/almond milk icing just so I could get on with the photo snapping. As it turns out, the icing compliments these bars nicely. 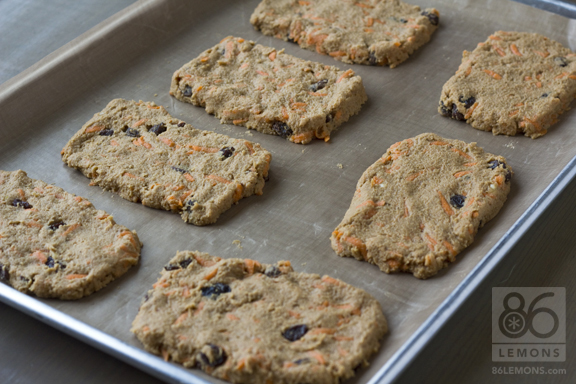 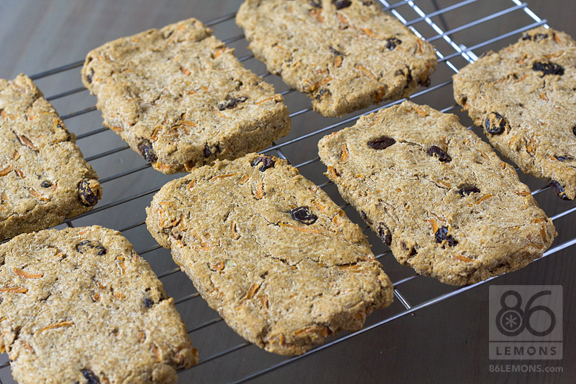 Carrot Cake Protein Bars (vegan, gf)
Save Print
Author: Leanne @ www.healthfulpursuit.com
Recipe type: Breakfast, Snack
Cuisine: Vegan, Gluten-Free, American
Serves: 8 bars
Ingredients
Instructions
Notes
*Leanne notes that any type of rice protein or combined vegan protein should do the trick. She says if you used hemp protein, you may have to reduce the amount as hemp protein is quite dry. If you don’t want to used protein powder, you could try almond flour instead. I used MLO Brown Rice Protein Powder, which doesn’t have gluten ingredients but it is not certified gluten-free. If you don’t have coconut butter and you don’t mind the sugar consumption, you can use powdered sugar and non-dairy milk to make an easy icing (you need very little milk, fyi).
3.2.2708 Thanks again for sharing this awesome recipe, Leanne – and for your killer blog!