Sorry for the inactivity here on the blog over the past week and a half. We were in the Dominican Republic for a mission trip with a group from our church. Two days before our trip was over, I started to get a sore throat and ears. Sure enough, it turned into a full-blown (pun not intended) sinus infection when I got home. Today, I’m finally starting to feel better. And so I post!

Several years ago, Hubs and I took a vacation with friends to Puerto Plata in the DR. I’ll never forget our shuttle ride from the airport to our resort. Never before had I seen such impoverished conditions. Living quarters made of cardboard and scraps. Naked, barefoot, dirty children urinating in the streets. Piles of trash everywhere. My heart ached for these people. I felt an overwhelming sense of guilt. Here we were, about to spend an indulgent, all-inclusive week in paradise while others barely had any shelter, food or clothing. Hubs and I vowed that when we returned to the DR, it would be to help. Finally, we made good on our promise.

Next to being there in person, there’s no better way to paint a picture of the Agua Negra community than with photos. I could try to explain it, but really you’ve got to see it. I put together a video with some of the photos…

As you can see, there is much poverty and need. The Agua Negra community (built on an old garbage dump along the industrial harbor of Puerto Plata) has no septic system, no trash service, limited electricity (which is often not working) and very limited running water. It is overcrowded and polluted. When it rains, the mud rises, causing contaminated water to flood the streets and homes. Most homes are nothing more than shacks with very leaky roofs. It is a sad, sad situation which, at first glance, could seem hopeless.

But then you meet Sandra, Pastor and Community Leader. She has been called the Mother Teresa of Agua Negra. A resident herself, this single mother of four has made it her life’s mission to bring positive change to her community. She is a joyful prayer warrior with more faith than just about anyone I know. Her outreach to organizations around the world has resulted in new roofs and floors for some of the homes, a few new/improved homes, a church, a school, facilities for the Boys and Girls Clubs, an internet center, a sewing facility, a clinic and more. In addition, the community has also been made safer simply by the respect they have for their leader, their neighborhood and each other. Much has been done, but there is still so very much to do.

I found the following video of Sandra being interviewed by Servants Heart Ministries. The house they are standing in is very representative of the majority of the homes in the community.

During this trip, our team initiated several projects, including construction on what will be a library/tool closet/playground (an addition to the existing school), new plumbing and bathroom facilities at the church, home visits with community members, work/restocking/fresh paint in the clinic, and activities with the Boys and Girls Clubs. We also installed and implemented new technology at the church, which will allow community members to view educational DVDs, family movies, recorded church services, and so much more – all on a giant projection screen. We are excited about how far-reaching the impact will be.

As much as we were able to do for them, they truly returned it tenfold. The people of Agua Negra are some of the most generous people I’ve met. Not only would they give you the shirt off their back, but they are generous in spirit. They are rich in community because they depend on each other. They feed each other, they look after each other’s children as they roam the streets, they share what little they have. We were quite awestruck at even the children’s instinct to share. Here in the land of plenty, when you give a child a piece of candy or a toy, their initial reaction is usually not to share. But there, they share without hesitation. This is a shot of our pastor (who surprised us when he flew in on day three of our trip) and me after we finished painting the clinic. With no running water and inadequate tools, things can get messy. Right after this shot, a man standing in the street went and got a jug of water, came back and poured it over my hands. Such a sweet gesture.

Several of you have been curious to hear about what I ate while I was there. Admittedly, I was a little nervous about it. Fortunately, I had absolutely nothing to worry about. The place we stayed (a very humble resort, and I do mean HUMBLE) provided our breakfast and dinner everyday. Breakfast options were toast, peanut butter, jam, fruit, scrambled eggs, bacon, pancakes, orange juice, coffee. Usually I had toast with peanut butter, fruit and a glass of orange juice. I could eat that everyday and never get sick of it. For dinner, we each got to place our order from the resort’s restaurant menu. I had pasta with red sauce a couple of times, which was pretty good. Then the owner found out I was vegan and told me they could make an eggplant dish, so I had that a couple of times too. One night, we went out for dinner to a restaurant that only serves fresh fish and a few side choices. That night, I had some sweet potato slices and french fries. Not so healthy, but it worked. Now, lunch was a whole different story. Each day, Sandra’s sweet mother and her helper prepared a huge lunch for our entire team, which was served at the church. All of the food was prepared with filtered water (in the world’s tiniest kitchen) and was safe for us to eat. And let me tell you, they put out a huge spread. There was rice and beans (which were AMAZING), usually a meat choice or two, a few salad choices, fried plantains, fresh guacamole, sweet potato slices, fried eggplant and fresh fruit. I ate like a queen and there wasn’t a single thing I tried that I didn’t like. I had far more options that I do at most restaurants in my town. So much for my plan to drop a few pounds while I was there. ;) 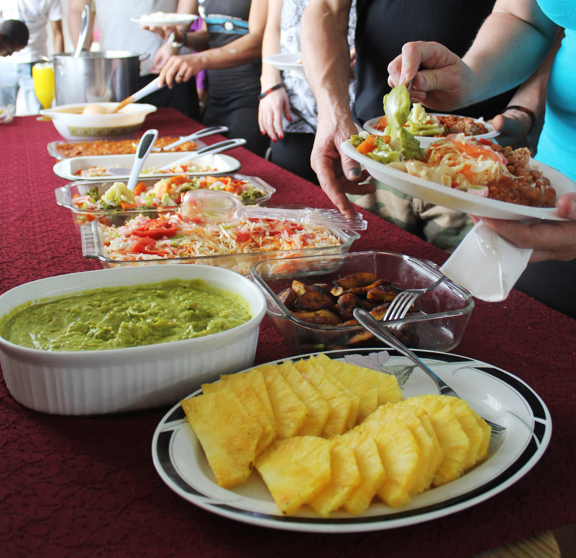 We learned so much, each taking away our own blessings, experiences and insights. Personally, it was quite a reality check for me. Not only does it make me even more grateful for where I live and what I have, but it also makes me want to do more. After being immersed in such poverty for a week, you can’t walk away and not be affected, not want to do more. While I can’t fly to the DR every week, I do have plenty of local opportunities to serve. If you have ever considered doing a mission trip, but haven’t done it for whatever reason, I would strongly encourage you to just make it happen. Where there’s a will, there’s a way. You will be forever changed by it.