Last week we celebrated Hubs’ birthday. Ever since he was a kid, he’s had this obsession with a tiny little bakery in his hometown called Zeeland Bakery. In his mind, this place is legendary. While he’s nuts about their donuts and cookies, it’s their cake (and by cake I mean frosting) that he absolutely adores. It’s super sweet and sugary. No whipped/light/fluffy stuff here. This stuff is heavy-duty. And those gross frosting flowers? He loves ’em. He would love it if the whole cake was covered in them. I don’t know anyone with a bigger sweet tooth than Hubs. Except maybe my sister, whose favorite food group is candy.

Here is a photo of last year’s cake, along with a card he received from my mom. I can’t remember exactly what it said inside, but it was something about being excited to eat cake. How fitting. Every year, I get him a Zeeland Bakery cake for his birthday. He expects it. In fact, for weeks in advance he’s undoubtedly dreaming about it. I’m telling you – he’s passionate about it. Just ask our church small group. During one of our potlucks, they were in hysterical laughter (we’re talking belly-rolling, side-splitting, tears-running-down-the cheeks laughter) as they listened to him affectionately pour out his love of ZB and their cake. It went on and on and on and on.

This year, I just couldn’t bring myself to order the cake. I decided he was going to have to fall in love with a new cake. One that doesn’t induce a sugar coma or turn his heart into a ticking time bomb. A vegan cake that won’t be quite so hard on the ol’ ticker.

My plans went awry when I replied to all on an email, letting our small group know that it would be Hubs’ birthday on our next meeting date. Almost immediately, there were replies asking if that meant we’d be having ZB cake and offering to get the cake. Rats! Well it’s one thing for ME not to get the cake, but it’s quite another to forbid someone else from getting it. Pretty sure I’d be deemed the Wicked Witch of West Michigan. So I caved. Sure, go ahead. Get the freakin’ cake. He’ll love it and he’ll be totally surprised and everyone will get a kick out of watching his eyes pop out of his head. And they did. Especially when he was served a piece as big as his head. Pure sabotage, I tell ya.

Ah, but we would also be celebrating another group member’s birthday. One who happens to be allergic to gluten. Why yes, I will bring gluten-free cupcakes for her and any other sensible takers in the group. And so my recipe search began. Mostly it was the ingredients and/or process that ruled out the majority. I didn’t have time to run to the store for ingredients or make a fussy frosting. Alas, I found a Vegan Chocolate Cupcake that was gluten-free and (bonus!) soy-free… with a manageable ingredient list… simple instructions… and a ringing endorsement from the recipe creator. Bring it on. I was most impressed with how the cake portion turned out. Really good stuff! The frosting ingredient measurements didn’t seem to work quite right for me, so I had to play around with it for a while, adding more milk to thin it out a bit. It was a bit rich and thick for my taste, but of course, Hubs loved it (it’s full of sugar, duh). I got out my cake decorating kit, chose the perfect tip and loaded up the bag with frosting. But it was just too darn thick, so I ended up just spreading it on with a butter knife. I think maybe had I used coconut milk in the carton instead of the can, it would have been a different story – but that’s all I had on hand. 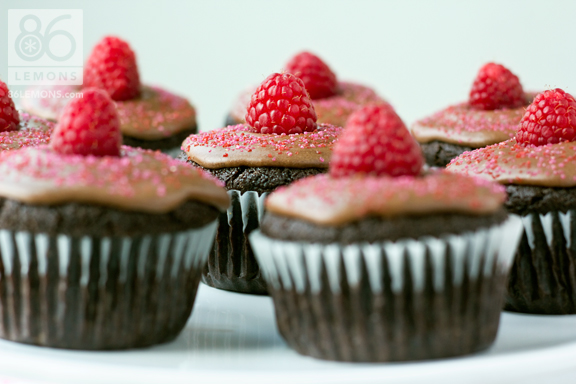 The original recipe (from Aine Carlin at MarcusSamuelsson.com) split the frosting into two parts – one vanilla and one much smaller chocolate portion for creating a small rosette. I just made the whole batch chocolate and decorated with colored sugar and raspberries instead.

Of course, Valentine’s Day is just a few days away, so this would make a perfect treat for your loved ones! 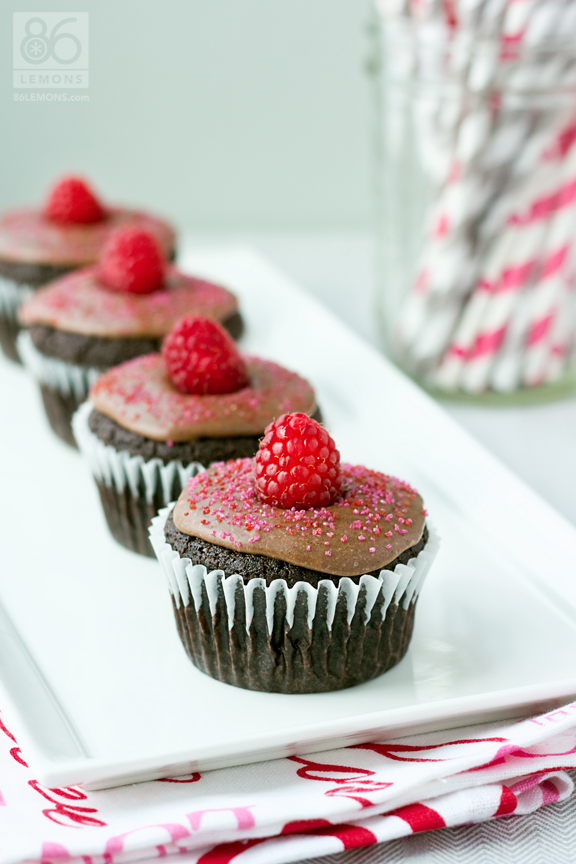 And with that, I’m signing off because I’m guessing you’ve heard enough about cake and cupcakes for one day ;)