I’ve been trying to post everyday, except Sunday (and Saturdays are a bonus if I have time). I have a pretty good excuse for not posting yesterday. I was in Chicago at Harpo Studios for a taping of Lifeclass with Oprah and Iyanla Vanzant! I was fortunate enough to go with three fabulous friends (we called ourselves “The Coral Club” cuz we all just happened to wear coral – and so did Oprah!). Believe it or not, this was my THIRD visit to Harpo. The first time was during her last season for a taping of The Oprah Winfrey Show. The second time was in May for a taping of Lifeclass (one of her new shows on OWN). Each time was amazing since I was convinced I would never ever get tickets to see Oprah. I had tried soooo many times and had no luck for years and years and years. Persistence is key! 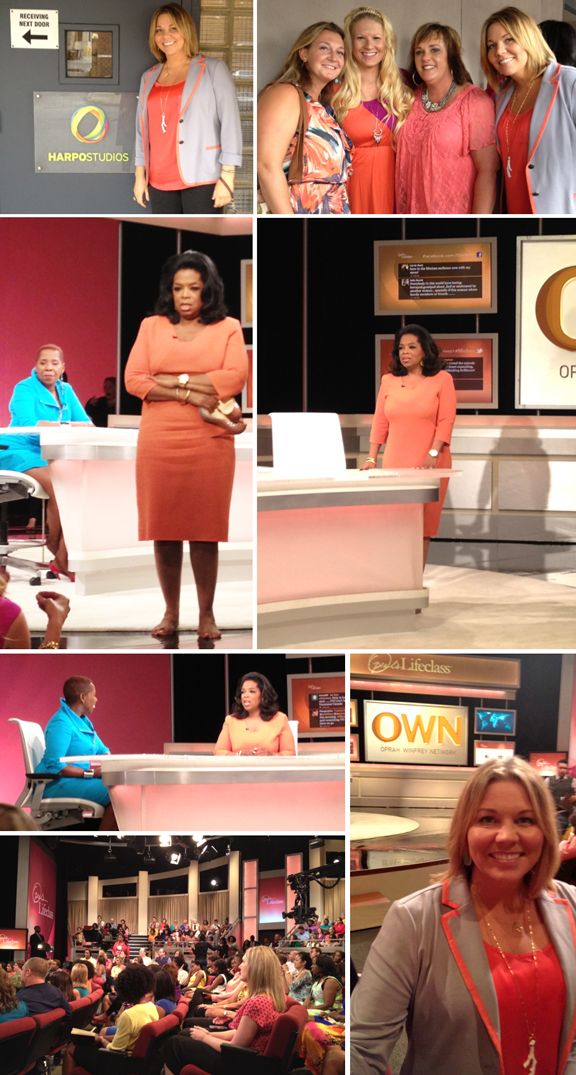 Unfortunately, it was raining as we were standing in line outside, waiting for the morning taping to end. So much for my hair. However, even with flat, frizzy hair, I still managed to get a REALLY great seat! And so did one of my friends, who sat right behind me. There really isn’t a bad seat since the studio is so small, but the other two girls were in the higher seats further back. Of the three visits, this was by far the best seat I’ve had. The last two times, I sat in the higher sections at the back. By the way, you don’t get to choose – they tell you where to sit… and I have no idea how they decide who sits where. I imagine they like to have a good mix of clothing color, race and gender. Just my guess.

We were told to arrive an hour early for a sneak preview of a new show debuting this Fall on OWN. Turns out, it was “Iyanla, Fix My Life,” which premiers on September 15. After seeing the preview, I will definitely be watching the series. Iyanla has a unique, raw, honest (and often humorous) way of getting to the core of the issue at hand. She doesn’t put up with any bull – I like that.

Yesterday’s Lifeclass topic was Family Secrets (show will air on September 23). Oprah and Iyanla helped several guests (some via Skype, phone, in studio) work through revealing their family secrets. The girl sitting right next to me revealed her family secret for Oprah, Iyanla, the studio audience and the whole world to hear (how scary!). Another woman gambled away the down payment for their house and didn’t know how to tell her husband. At one point, Oprah made sure her ‘daughters’ (four of her students from her school in Africa were in the audience) were paying close attention and taking note of the life lessons. Tune in on 9/23 and check it out!

After the show, Oprah took off her Louboutins, came out from behind the desk and took a few questions from the audience. It was crazy being THAT close to her. I know she’s human just like the rest of us, but I still get star struck. I mean, c’mon – she’s OPRAH! I can’t say I agree with all of her views/beliefs, but I do have major respect for her and all of her accomplishments. She’s an amazing woman with a huge heart who has done so much for so many people.

With the exception of a sick friend and a poor dining experience on the way home (the two were unrelated), it was an awesome day! So grateful for the opportunity.

What about you – have you been an audience member for a TV show taping? Are you a fellow Oprah fan? Do tell…