I’m BACK!!! I wish I could say I was away on some exotic vacation, but sadly that is not the case. The truth is I’ve just been so busy that blogging had to take a back seat for the past week. I won’t bore you with what I’ve been up to – it’s not that interesting. Although we did get to celebrate Christmas a little early with my family last weekend. Our full group of 51 was reduced yet again now that two more families have moved out of state (including my sister’s family who now live in Texas). With the 16 who moved away, we are now down to 24 in Michigan. This doesn’t make Grandma happy. Thank goodness for technology that keeps us all connected. Even Grandma has a smart phone and a Facebook page!

Two Saturdays ago, I went to our last Farmers Market of the year. They will open again in May. Mostly I picked up foliage for outdoor decor (greens and berries for the urns, wreath for the door, etc). I also bought three varieties of organic, heirloom dried beans from Shady Side Farm – Nuña Beans, Green Flageolet Beans and October Beans. I’ve never tried any of these varieties until now. Today I used the October beans in a vegan, gluten-free Pasta & Bean Soup with Kale recipe from Whole Foods Market. 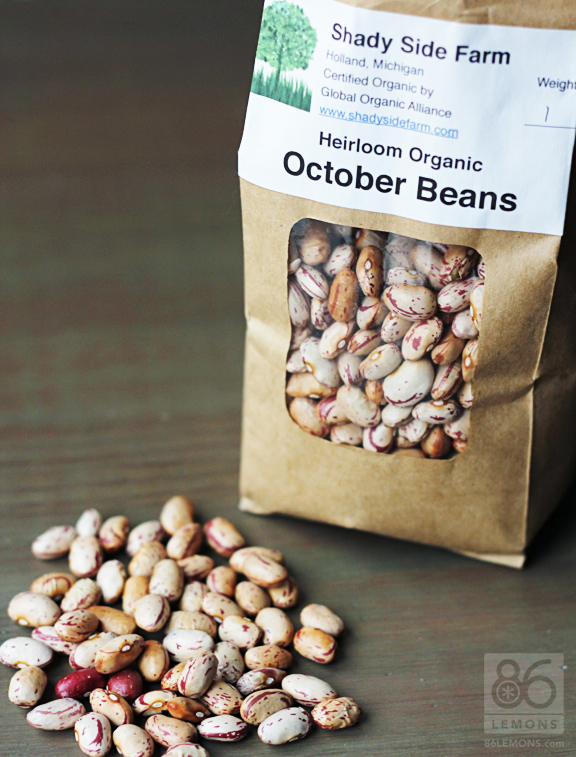 The recipe called for cranberry beans (also known as barlotti beans). But I used October beans instead, which are very hearty and have kind of an earthy taste and texture. I just bought these new (to me) varieties to try something different. I’m no bean connoisseur, so I probably wouldn’t have tasted a huge difference had I used kidney or pinto beans. However, I do love that they were grown locally, freshly dried and NOT CANNED with a bunch of salt, preservatives or corn syrup. The beans I bought, along with other heirloom varieties, can be purchased online from Shady Side Farm.

Now, as far as the soup goes, the original recipe wasn’t too impressive. It was very bland. So I doctored it up with some additional spices and it turned out much better. Hubs and our friend, Amanda, approved ;). It’s very filling and can definitely be a meal in itself. Perfect for chilly winter nights! 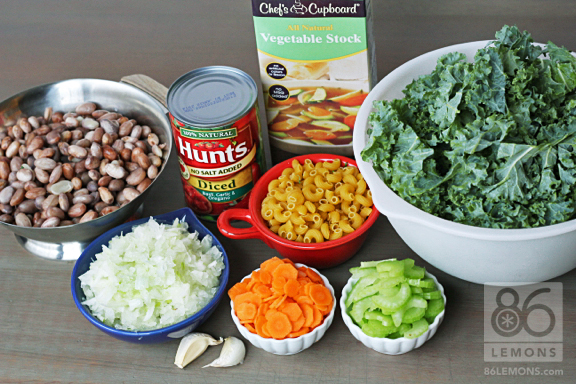 YIELDS about 12 cups, give or take

*NOTES:
Original recipe called for cranberry (aka borlotti) beans. I used October beans. You could also use kidney, pinto, etc. The beans will need to be soaked overnight, so plan accordingly.

Original recipe called for ¼ tsp fine sea salt. Since I used low-sodium broth and “no salt added” diced tomatoes, I added a LOT more salt (about 2 tsp or so). I added the four additional spices (not in original recipe) to taste, so feel free to sub your favorite spices or herbs.

Kale is really good for you, but you can leave it out if you like. One thing I would do differently next time is chop it more finely. It didn’t wilt down as much as I thought it would.

STEP 1:
Place dried beans in a large bowl with 6 cups of water. Let soak overnight. (Optionally, you can quick soak the beans by placing the beans and water in a heavy pan, bring to a boil, cook for 2 minutes, then cover, remove from heat and let stand for 1 hour.) STEP 2:
Drain and rinse the soaked beans and transfer to a large pot. Cover by 2 inches with cold water and bring to a boil; skim off and discard any foam on the surface. Reduce heat, cover and simmer until beans are tender, 30 to 45 minutes. Drain and set aside. STEP 3:
In a large pot, heat oil over medium heat. Add onion, garlic, carrot and celery and cook until tender, about 8 minutes. STEP 4:
Stir in drained beans, broth, 2 cups water, tomatoes and seasonings; bring to a boil. Add pasta and cook, stirring occasionally, until just tender, about 10 minutes. Stir in kale and simmer about 5 minutes longer. If soup is too thick, add water a cup at a time until desired consistency is achieved. Adjust seasonings as needed. 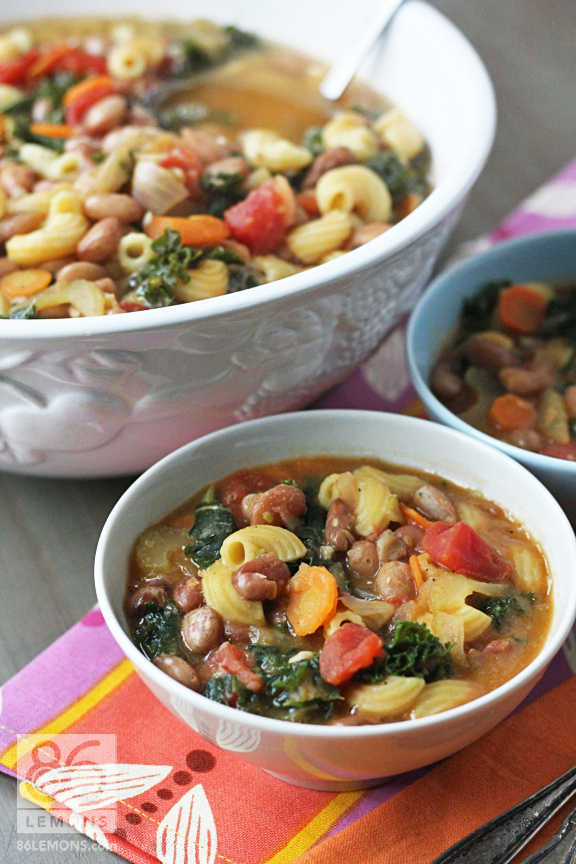 Anyone else anxious to find out who wins The Voice tonight?! All three finalists are sooooo good – I can’t decide which is my favorite. Hopefully all three will have long, successful careers ahead of them. And as long as we’re on the subject, I loved what they did at the beginning of last night’s episode to honor the victims of the Connecticut school shooting. So beautiful. So sad. My heart aches for the victims’ families and the children and staff who had to witness this tragedy. I know there are a lot of opinions out there about steps that need to be taken involving gun control, mental health and school safety. I don’t have the answers, but I do pray that those on all sides of these issues can come together so that no more lives be taken so senselessly. Let’s remember to keep the Newtown community in our prayers and surround them with our support.