This has nothing to do with this recipe, but can we just talk about The Bible miniseries on the History Channel for a second? Have you seen it? I had been hearing a lot about it. Last night, after getting home from a trunk show, I decided to go straight to bed because I was out of gas. Then I remembered this series and found it on On Demand. Hubs and I started watching it and couldn’t turn it off! We got about an hour into Episode 1 before we finally decided to call it a night.

This five-part miniseries (10 hours total) debuted on March 3, so two of the episodes have already aired, with the third airing this Sunday at 8/7C. Also, the entire series DVD is already available for purchase here. There have been several productions about the bible, but this one mostly piqued my interest because of the producers – Mark Burnett (Survivor, The Apprentice, Shark Tank, The Voice) and his wife Roma Downey (Touched by an Angel). Burnett is known for great television, so I kind of assumed this series would be quite good. And from what I’ve seen so far, it doesn’t disappoint. It certainly managed to hold our attention and I can’t wait to pick up where we left off. Even if you don’t believe in God or the bible, I think you would still find the series to be entertaining. I’m just sayin… it’s worth a gander.

Okay, so about that Baked Spaghetti Squash… Looks like angel hair pasta, doesn’t it?! It’s always crazy to me how much spaghetti squash looks like real pasta. And it’s SO EASY to make. Not to mention it’s delicious AND good for you, too! Last week, I bought one without having a specific recipe in mind. Later, I found this gluten-free, non-vegan recipe on Two Peas & Their Pod and decided it would be easy to vegan-ize it. Instead of Greek yogurt, I used soaked cashews and the juice of one lemon. I made a couple other small modifications and I’ve gotta tell ya… this dish was the bomb. Really fresh and flavorful. The rich, creamy sauce makes it taste sinful, but it isn’t. Gotta luv that. If you’re not a squash fan, don’t skip this recipe altogether – this sauce is great over pasta as well. If you’ve never prepared spaghetti squash before, don’t sweat it – it’s so simple. It’s all in the recipe link below, but here’s the gist… cut it in half, scoop out the seeds, brush with olive oil, season with salt/pepper, place cut side down on a baking sheet and bake for 45 minutes at 400ºF. When it’s cool enough to handle, use a fork to scrape the flesh into long spaghetti-like strands. It takes very little effort and is fun to do. Once again, I used my trusty Vitamix to make the sauce and it worked like a charm – never fails. For those of you who are into food photo props, this one’s too good not to share. See the background texture in the photo above? We have a friend who is a mason. He was laying the block for our greenhouse foundation when I spotted these perfectly grungy boards leaning against the garage. I think he thought I was nuts when I asked him if I could have them. Turns out, these “mortar boards” serve as somewhat of a mason’s palette, holding the mortar while he works. They must be a dime a dozen where he works because he let me have three of them without hesitation. They are covered in dried mortar, which mostly scrapes off with a shovel or chisel and some elbow grease. As you can see, I didn’t get it quite all off, but I kind of like the extra texture. You just never know where you might find your next background ;) 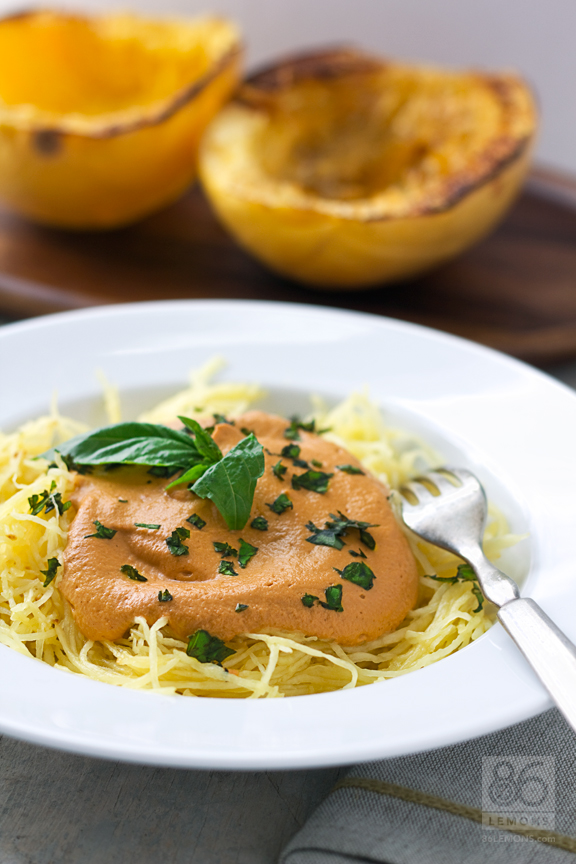 FYI – orange or yellow bell peppers would work in this recipe, too. I used one red, one orange. Bon appetit!