Today is day #14 of my 28-day detox. Half way there and going strong. I am learning so much, even growing my own sprouts! And I bought my very first ginger root. I had no idea what I was missing. The sprouts are so much bigger, better and cheaper than store-bought. Not to mention, they are the easiest thing ever to grow. And the ginger – well let’s just say that my morning smoothies have never tasted better. Just use a vegetable peeler to peel the skin of the portion you want to use, slice off the portion and drop it in the blender with the rest of your smoothie ingredients. I use about a ¼” thick slice. And yes – the sprouts go in my smoothie, too! I wish I could say that I’ve dropped a few pounds or experienced some very noticeable changes. But I haven’t – yet. Maybe if I were able to squeeze in every single thing recommended by Margaux (detox class instructor), it would be another story. Haven’t mustered up the courage (or the time) to do an enema yet. Only took one salt bath (should have taken six by now). Haven’t been eating 100% raw (although, pretty close to it). But I HAVE been quite on track with several other pieces of the routine. Still working on getting in all of my water each day (it’s hard!). I have to say, I do feel really good. Sometimes when changes take place slowly, we forget what we felt like before. I’m just crossing my fingers that I’m getting rid of some toxins in one way or another.

I am grateful for Margaux opening my eyes to the world of raw eating. While searching for raw vegan recipes (that don’t require a dehydrator or juicer, both of which I do not own – yet), I found the most amazing blog called My New Roots, written by Sarah Britton. I’ve stumbled on it before, but this time I really got into reading several posts and her FAQ page. Now I feel the need to start from the beginning (2007) and read my way through her whole blog. She’s so full of great information, amazing recipes and oh, how could I forget – her photography is absolutely GORGEOUS. This girl’s got it goin’ on.

I tried her Raw Taco Fiesta recipe (vegan and naturally, gluten-free). I LOVED it. So did Hubs. On Sunday, we ate it for lunch AND dinner. Raw food is really fun to photograph. The colors are so bright and cheery that you would think it was July instead of November. Did you look at this photograph and wonder why there was ground beef in my raw vegan taco? Looks like it, doesn’t it? It’s walnuts! Crazy, right?! It looks so much like meat, it almost grossed me out a little.

Even though this may look like a lot of ingredients, I PROMISE you that a) it’s not as bad as it looks, b) it’s SUPER EASY to make, and c) it’s totally worth it. I’m telling you – this recipe rocks. The original recipe called for half as much walnut ‘meat’ (I doubled the recipe for you because we had lots of extra salsa and sour cream). If I remember correctly, after making a second batch of the walnut mixture, the recipe made a total of about 12 tacos. I think we had about three each for lunch and dinner. 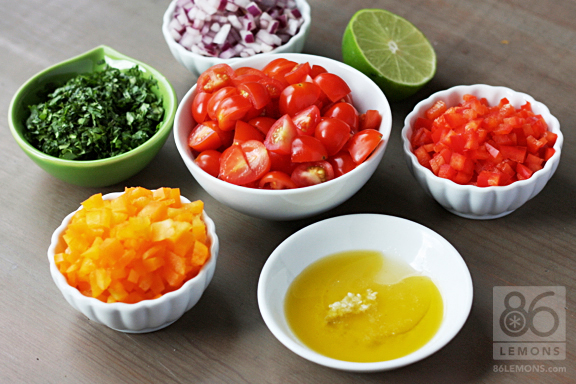 *NOTES:  Raw honey is not vegan. However, many vegans (including me) consume it because it’s just so darn good for you! I prefer it over agave nectar in this recipe.

STEP 1:
Whisk the garlic, lime juice, honey, olive oil and sea salt in the bottom of a bowl and set aside.

STEP 2:
Cut up the veggies into rather small pieces, chop the cilantro and add everything to the dressing bowl. Fold to combine and let sit for at least 10 minutes to allow the flavours to meld. 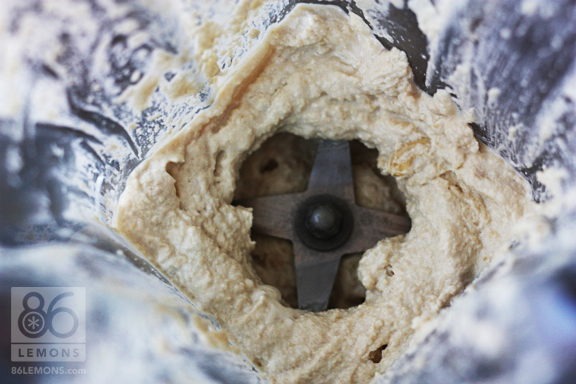 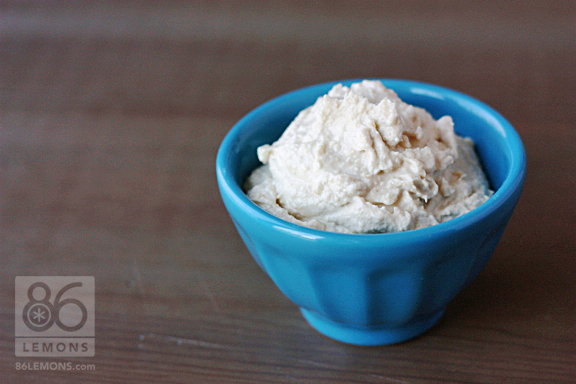 STEP 1:
Put all ingredients EXCEPT WATER in a high-speed blender or food processor and blend, adding water one tablespoon at a time until the desired consistency is reached. If you want a thick cream, use less water, for a thinner sauce, use more. (You will not achieve a perfectly smooth sauce with a food processor, but it is still delicious!) 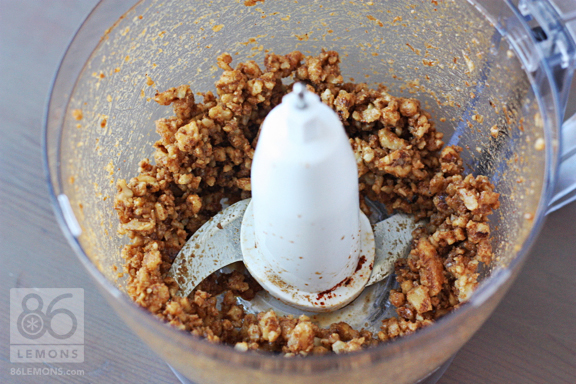 *NOTES:
It’s not raw, but you could use soy sauce or tamari (gluten-free soy sauce) instead of nama shoyu.

STEP 1:
Put all ingredients in a food processor and pulse just to mix. Don’t over-blend, or you will end up with walnut butter! Sarah (whose writing is often humorous) says: “Wrap it all up in a cabbage, collard, or giant spinach leaf, and you have successfully replaced your Old El Paso taco-in-a-box forever. He never really loved you anyway.” Ha! How true ;) I used lettuce leaves for my ‘shell.’ You could also place everything on a bed of chopped greens and make a taco salad instead. Just imagine – tacos for lunch AND dinner… with NO GUT ROT! How revolutionary. 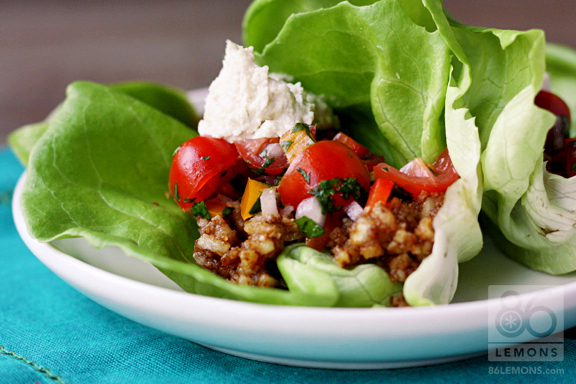 I’m so thankful for teachers like Margaux and Sarah for leading the way to healthier eating and living. I’m learning so much from them and others, too. The other day, while getting groceries, I looked down the cracker/cookie aisle and literally felt a little twinge of rage. An entire huge aisle just for nutrition-less, processed, chemical-laden snack foods. So sad. We need to change this. We can do better. It’s no wonder America’s ranks have fallen in literacy, math, science, life expectancy, and a host of other categories. Look at what we are feeding our children! And why do you think cancer, diabetes, food allergies, etc are all so widespread? WE ARE WHAT WE EAT, folks.