On Saturday, I had the pleasure of being one of 20 food blogger participants in the inaugural Taste of Michigan event, which took place in Grand Rapids, MI. The event was created and hosted by Rachel Gurk of Rachel Cooks and Liz Della Croce of The Lemon Bowl. Rachel and Liz organized a full day of activities/experiences for the group, including the Fulton Street Farmers Market, prop shopping at Art of the Table, lunch at Bistro Bella Vita, wine and cheese sampling at Reserve Wine & Food, and dinner at Six.One.Six. Each blogger also received over $500 in swag! Seriously, best swag bags ever.

I met fellow food bloggers from near and far (many in state and a few out of state). I most certainly was the newest blogger of the group, so I was eager to chat it up with the veterans about their blogging experiences.

I was happy to find a tasty vegan option on the menu – Veggie Hash (minus the eggs). I heard the Baked Oatmeal was also good! This is an awesome farmers market with great finds such as heirloom tomatoes, Osage oranges, rare herbs and greens… and much, much more!

10:30 a.m.
Prop shopping at small shops in East Grand Rapids, including Art of the Table. This was my first visit to Art of the Table and I’ll definitely be back! From kitchen ware to home decor to wine and cheese, this little shop is packed with great finds. The staff was very helpful and kind. Patty of Patricia’s Chocolate was also at the store for a tasting of her fine chocolates. Each of us received a killer swag bag from Art of the Table, complete with all of the Michigan-made goodies pictured above. The adorable mitten-shaped Michigan Bar from Patricia’s Chocolate is vegan and was very good. The non-vegan food items went to Hubs – so far, he really enjoyed the CandyShanes “Tooth Friendly” Double Cashew Brittle (said it was the best he ever had). 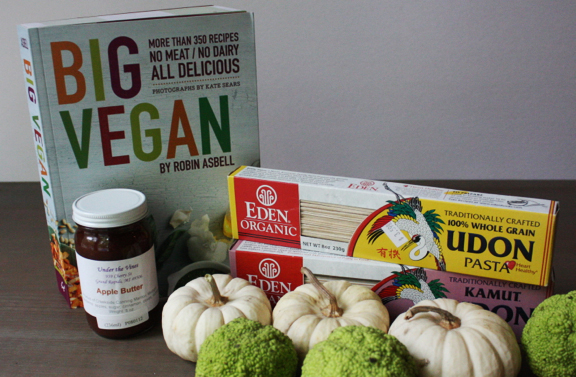 I picked up a few goodies from other local shops including a vegan cookbook from Lamb, Michigan-made apple butter from Under the Vines, and udon pasta noodles from Nourish Organic Market. I bought the mini white pumpkins and Osage oranges at the Fulton Street Farmers Market. Lunch started off with a demo of the KitchenAid 13-Cup Food Processor with ExactSlice™ System, which I now want so badly!!! For one, it has a 13-cup capacity – that’s huge. Secondly, it’s very quiet! And it has a feature that allows you to adjust the slicing thickness externally (without even opening the jar!). Add it to the wish list. Liz used the food processor to demo her delicious Hummus with Toasted Pine Nuts recipe. 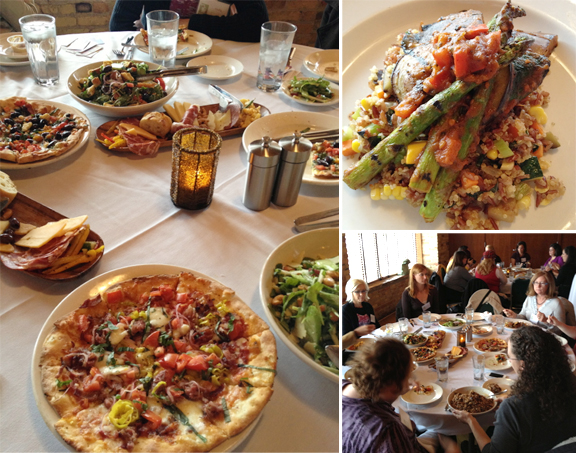 Our table was so full of food, and it just kept coming. Unfortunately, it was not vegan, so I had to skip most of it. However, the chef did prepare special dishes for the vegans in the group. The upper right photo above is a shot of my plate full of roasted vegetables with quinoa and juicy portobello mushrooms. This dish was amazing – especially the mushrooms – and so pretty, too!

Liz and Rachel drew names for a few giveaways and one lucky blogger even won a KitchenAid stand mixer! Wow! 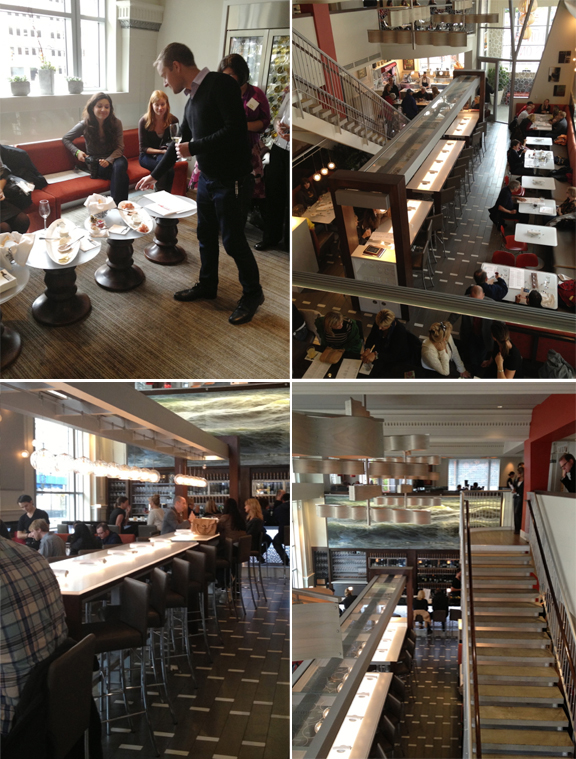 General Manager, Peter, was kind enough to give us the history of Reserve, and a tour of all three floors. Such a swanky place!

After this stop, we had some free time to wander about downtown. One of my new food blogger buddies (Tracy) and I strolled about the area and took in some of the amazing ArtPrize entries. Our four course meal started off with the most amazing Cauliflower Soup topped with cinnamon-apple puree (it was vegan, but you would never know it – soooo good). This was followed up by a Salad of Beets and Frisee with vanilla poached pears and Michigan maple vinaigrette (the vinaigrette was outstanding!). Again, this dish was also vegan. For course three, the non-vegans were served Roasted Otto’s chicken breast with golden chanterelles, Brussels sprouts leaves and heirloom carrots (vegans received the same dish, only with tofu instead of chicken). At first, I was disappointed to see tofu, but was pleasantly surprised by how flavorful it was, and how well it was prepared. Lastly, dessert consisted of vegan Banana Creme Pie and truffles – yum.

THE SWAG…
So much swag, I couldn’t fit it all in one photo. All Michigan-made products. Hubs was particularly excited about the Free Food for a Year punch card from bd’s Mongolian Grill. He’s in GR far more than I am, so he will make very good use of it! 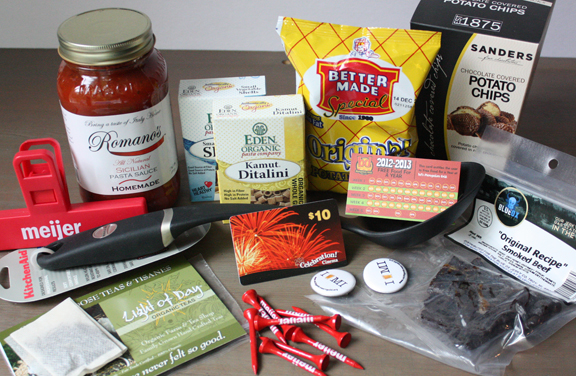 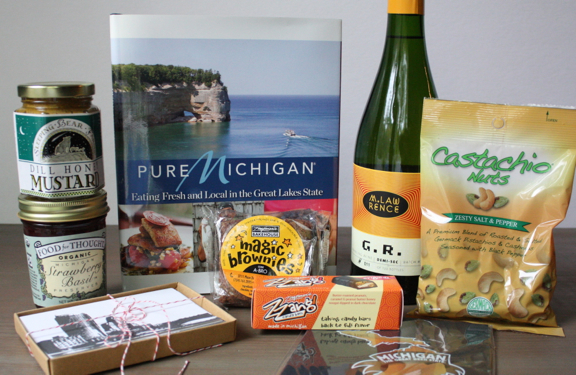 A huge thank you to Rachel Gurk and Liz Della Croce for organizing this fantastic event! I know it took a lot of planning and I am so appreciative of their hard work. I’m so glad that I got to be a part of it and can’t wait for next year’s event!