Crap. Is August really over? Why does summer go so fast and winter drags on forEVER? I think I was meant to be a California girl. Poor Hubs has to listen to me whine and beg to move to Cali all winter long. One of these days I’ll wear him down and he’ll give in ;)

What did that little rant have to do with this month’s Vegan Food Swap? Not much.

This is my second time participating in the Vegan Food Swap organized by Cat at The Verdant Life. Every month, Cat assigns each participant two names – one to send a package to and one to receive a package from. Spending limit is $20. It’s a great way to ‘meet’ other bloggers, fellow vegans and get introduced to new products. This time, my package of goodies came from Cathrin at From Omi with Love. I forgot to take a photo of my package (oops!) so I put together a collage of product images instead. This is what was in my box… 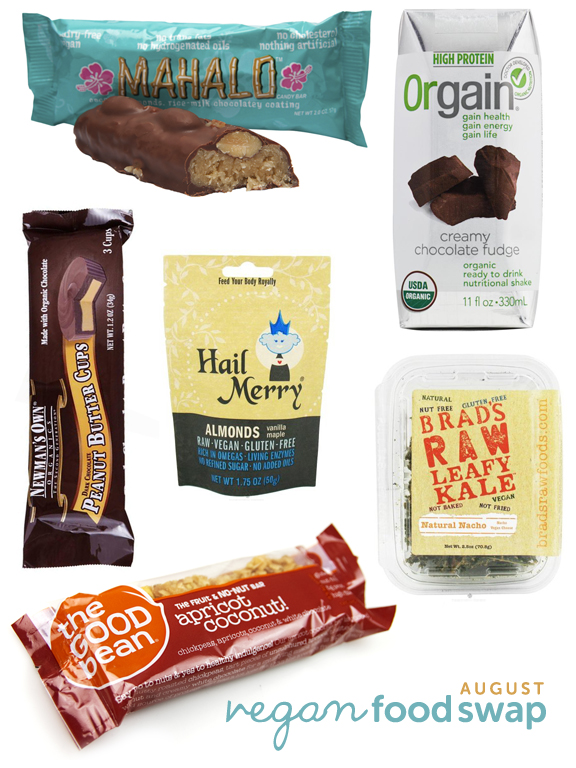 I know – fun stuff, right?! And it was all new to me! Unfortunately, two of the items weren’t vegan (The Good Bean bar and the Newman’s Own PB Cups both have whole milk powder in them). Confession – I ate the PB Cups anyway. Couldn’t resist. They were divine.

The Mahalo candy bar (vegan AND gluten-free) was awesome. As it should be – it has the same amount of calories and more fat than a Snickers bar! But it was fun to indulge a bit. This is a great example of how vegan does not always mean healthy.

The Orgain nutritional shake was thick and creamy and FILLING. Full of great ingredients and packed with protein. Good stuff.

Now – the kale chips were another story. I keep seeing recipes for kale chips all over the place. I’ve been tempted to make them because so many people (including Cathrin) seem to love them. How convenient that they would show up in my VFS package this month. I was so excited to taste them! As it turns out – they just aren’t my thing. I think it might have something to do with the flavor of nutritional yeast. This ingredient was also in the disgusting Vegan Mac n Cheese recipe I tried (and hated). Maybe I’ll try making my own kale chips without nutritional yeast. Anyone have a great recipe to share?

Thanks to Cathrin for introducing me to some new vegan (and gluten-free!) products. Click here if you are interested in participating in next month’s swap.