I had a great weekend, packed to the gills. In fact, it would be much quicker to tell you what I DIDN’T do this weekend.

Four of my college girlfriends came to my house on Friday for a girls night. Two of them arrived early, so we went “junkin” at a local antique shop. Antique shops have the craziest things. We got a laugh out of the “Relax” bed pan, the scary head sculpture with freaky hair, the olympic-esque statue, the pregnant mannequin… who buys this stuff?! Angi scored a couple of old crates at just $12 each. One will be a shelf for Hotwheels in her son’s room. Clever, eh? Later that night, we all went to Saugatuck for dinner. Scored an outdoor table. Perfect weather. Lots of laughs. A great night. Three of the girls stayed overnight. Two of them had to take off early on Saturday, but one stuck around and went downtown with me. After loading up on fresh fruits and veggies at the bustling farmers market, we did a little shopping, had lunch and called it a morning. I did more shopping (TJMaxx, Target, Lowe’s) and came home to get a few things done around the house.

That night, Hubs and I had farmers market bounty for dinner, including sweet corn on the cob and fresh tomatoes. Yum. Took the dogs for a walk. Another perfect summer night. Later I got lost in blog-land, purchased/dowloaded/read this e-book and decided I needed a new camera lens.

After church on Sunday, we went to Best Buy and scored a deal on a new lens. I spent all afternoon taking photos, experimenting with my new lens. And here’s where the fun ends.

I wasn’t going to tell you about my recipe failure, but then I decided it might provide some comic relief. I found a recipe for Vegan Raw Cacao-Coconut Fudge Bites and decided to give it a go. I love Nora’s blog, and her photos are so beautiful. Unfortunately, my fudge bites turned out nothing like Nora’s.

First of all, I dropped my food processor on our tile floor while getting it down from a high cupboard. The bowl cracked. The base got scuffed up, but the motor still works. So I keep going. The recipe says to process the shredded coconut for ten minutes or until it turns into a butter. Ten minutes go by. Fifteen. Twenty. I’m getting annoyed now. Is my cheap food processor not up to the task? Or maybe it’s in a bad mood from being dropped on the floor? I swear it must have taken half an hour for the shredded coconut to turn to what I thought was butter. Looking back, I probably should have let it go another ten minutes, but like I said, I was annoyed. I added the next few ingredients (I used cocoa powder instead of raw cacao powder). My mixture was dry and crumbly. Added more agave. No change. Added some coconut spread. No change. Now I’m really annoyed. But I keep going.

For the add-ins, I chose chopped pecans, mini vegan chocolate chips and I threw in  a small bag of sprouted sunflower seeds (cocoa molé flavored). I spread the mixture into a parchment-lined pan, as directed, and waited for it to harden for about an hour in the fridge. 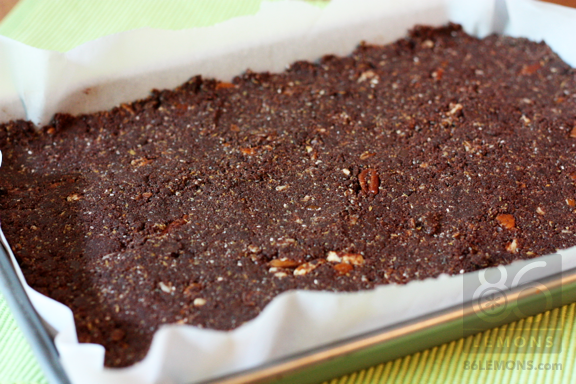 My sad little fudge bites turned out to be a dry, crumbly mess. And they didn’t taste so great. I think it was the cocoa molé flavored sunflower seeds – bad idea. The longer the “fudge” was out of the fridge, the worse it got. I wanted so badly to take gorgeous photos of yummy fudge bites with my new camera lens, but instead I just got more and more frustrated. I need a whole lot more practice with this lens. The combination of camera frustration and recipe failure killed the joy. 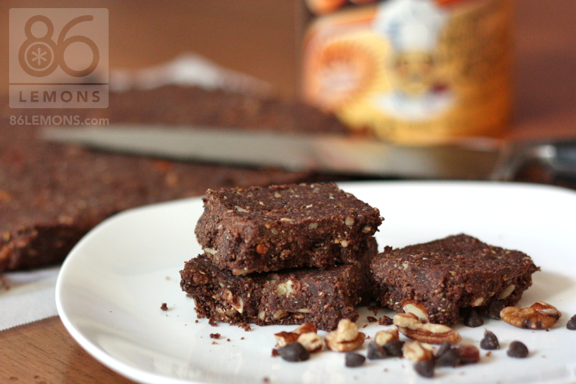 I STILL tried to save it. I made a smoothie with the crumbly mixture, strawberries, raspberries, soy milk, agave nectar and ice. It was gross. But Hubs drank it. 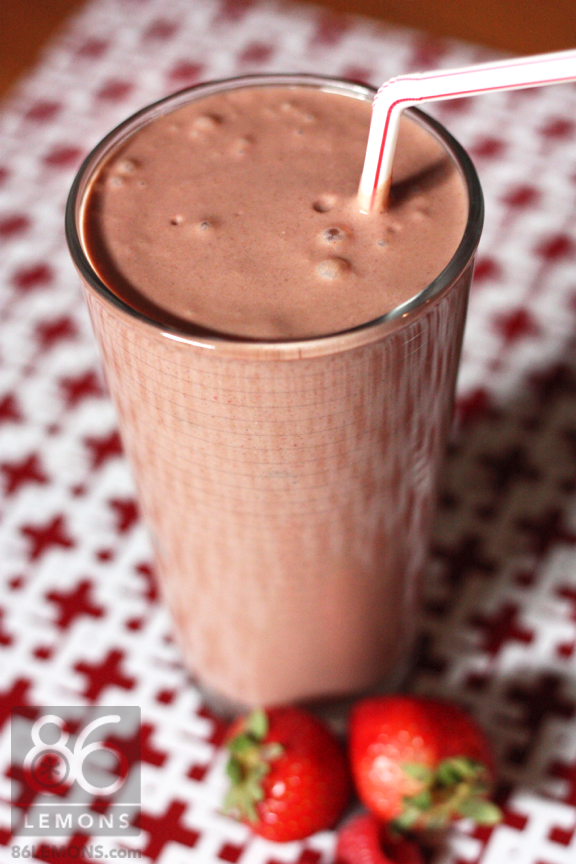 Then I crumbled it over vegan ice cream just for one last photo op. Hubs ate that, too. I couldn’t even look at the fudge stuff anymore. It’s still sitting in a huge pile on my kitchen counter. I hate to throw it out, but I’m afraid I’ll have to. I was telling my friend about my new blog while we were shopping on Saturday. She said I had to watch the movie, Julie & Julia. So we rented it yesterday and watched it last night (after my fudge debacle). I loved it. Especially the part where she’s about to give up and she’s sprawled out on her kitchen floor. Ha! I know the feeling! I did feel kind of stupid for failing at this simple no-bake recipe in my fairly spacious kitchen after watching Julie make advanced French masterpieces night after night in her itty-bitty  kitchen. Oh well.