A few weeks ago, I had the grand idea of inventing a key lime coconut popsicle recipe for Cinco de Mayo. Unfortunately, it didn’t turn out so well. I must have used too much key lime juice because they were quite tart. Not horrible, just not what I hoped for. BUT, in the process, I learned an awesome trick for juicing key limes–use a garlic press! GENIUS! Worked like a charm.

I decided to revisit that flavor combination another time, and moved on to Orange Creamsicle instead. I was shooting for a popsicle recipe, but as it turns out, I prefer this vegan, gluten-free recipe in its original form–as a creamy beverage.

Instead of using navel oranges, I used my new favorite fruit discovery–minneola oranges. Actually, the “real” name is Minneola Tangelo. I like to try new fruit and vegetables, and Meijer often offers unusual varieties. Sometimes I wish I wouldn’t have wasted the money, but how else would I know? The minneolas were 4 for $2 and were worth every penny. They are the sweetest, juiciest, easiest-peeling oranges I’ve ever had. LOVE. After a little research, I learned that they are a cross between a tangerine and a grapefruit, which makes them very sweet and a little tart. Honestly, I can’t stand grapefruit, so I’m glad I didn’t know this before I bought them because I probably wouldn’t have bothered. I really didn’t detect any grapefruit flavor at all, and very little tartness. They are sometimes called Honeybells because of their shape (they have a rounded knob on top). Another bonus–they often have very few to no seeds. And their deep orange color is gorgeous. Any type of orange will work in this recipe, but if you can find minneolas, go for it. You’ll only need two to get the required 1 cup of juice. By the way, that vintage Juice King in the photo above is one of my most used kitchen gadgets. I bought it an antique market years ago for about $10. They are not hard to find–ebay has a ton of them. I use fresh lemon/lime juice a LOT, and this heavy-duty workhorse squeezes out every last drop with minimal effort. While I adapted it slightly, the original recipe comes from Kris at Munchin with Munchkin. She’s a Canadian who experienced one too many cold winters (I hear ya loud and clear!), and decided to move south to Texas. Talk about one extreme to another! I don’t know if I could handle the Texas heat (although my sister and her family seem to enjoy it). Besides creating healthy recipes with local/seasonal ingredients, Kris is also a talented photographer–check out her work! As I mentioned, my intention was to use this smoothie mixture to make popsicles. The mixture straight out of the blender was DELICIOUS. I’m so glad I snapped a few pics before I poured it into the popsicle molds because I like it much better as a smoothie, and obviously decided to feature it that way. The popsicles were okay, but to call them a “Creamsicle” is a stretch. The flavor was there, but the texture was not. They were icy, not creamy. Much like my failed key lime coconut popsicles, which did not go to waste… 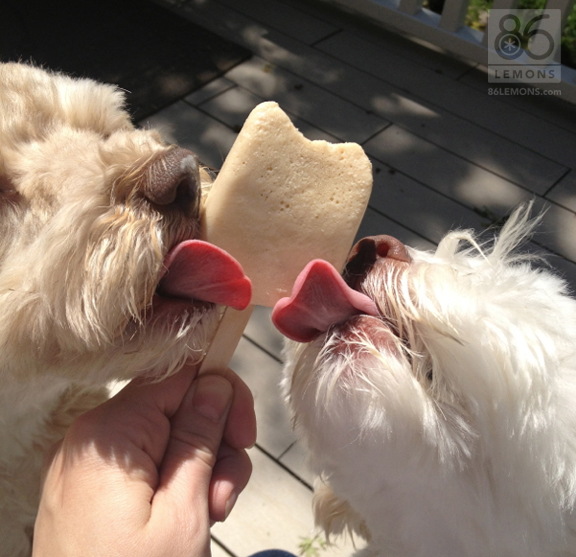 That thing didn’t stand a chance. ;)