If you read my Taste of Michigan post from last week, you may recall my new cookbook purchase – Big Vegan by Robin Asbell. This huge cookbook is FULL of inventive, creative, sophisticated (yet uncomplicated) vegan recipes. There are so many I want to try. I finally decided my first test from this book would be the oh-so seasonally appropriate, Harvest Vegetable Stew in Mini Pumpkins, which is both vegan and gluten-free. I must confess, before this recipe, I never before purchased, nor cooked, a parsnip. There’s a first time for everything, eh? They look like large white carrots, but have a sweeter taste. Turns out they are chock full of fiber, which will keep you feeling fuller longer. They are also high in folic acid (especially great for you mamas-to-be out there). This is a great link for more parsnip info, including how to buy, store and prepare them.

The parsnips and sage give this stew a sweet, distinct flavor, which I very much liked. However, if you are not a parsnip fan, you could substitute potatoes or sweet potatoes in this recipe. If sage isn’t your thing, you could use poultry seasoning, savory, marjoram, thyme or rosemary.

As you can see in the photo, my stew turned out to be VERY thick (which, again, I liked). However, I think it may have been due to my use of vegan CREAM instead of vegan CREAMER. I didn’t think there would be much of a difference, but cream is significantly thicker. The one I used was a mix of almond and cashew cream (unsweetened). Next time I will try the creamer instead. STEP 1
Preheat the oven to 400ºF. Carefully slice off the top of each pumpkin to make a lid (make sure to slice below the base of the stem). Scoop out the seeds, then place the pumpkins (upside down) and lids on a parchment-lined baking sheet/tray. Bake until a paring knife can easily pierce the shells, 30 to 40 minutes. I wrapped the stems in foil so they wouldn’t burn. Not sure if this is necessary, but it worked. When pumpkins are done, take them out of the oven, carefully turn them over, and let them cool.

STEP 2
In a large frying pan (I used a cast iron skillet), heat the oil over medium-high heat. Add the parsnips, cabbage, celery, onions, and carrot. Stir and cook until the onions start to brown, then lower the heat to medium-low, cover and cook for about 10 minutes.

STEP 3
When the parsnips are tender, add the sage and garlic and cook for about 5 minutes. Add the wine and raise the heat to boil it off until almost dry. 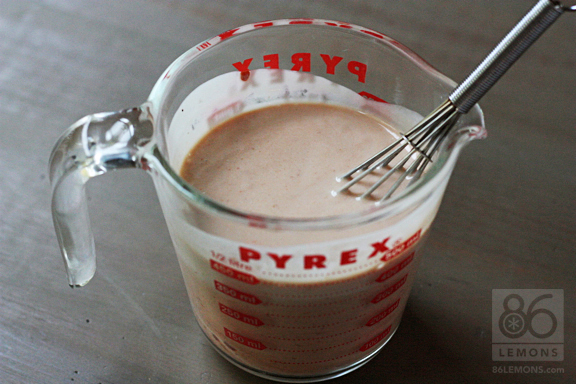 STEP 4
In a cup, whisk together the creamer and tomato paste until smooth, then add them to the pan with the salt and bring to a simmer. Stir until the sauce thickens, then take the pan off the heat, mash some of the vegetables coarsely and stir in the pecans. STEP 5
Using a spoon, scoop out the pumpkin flesh into bite-size chunks. Stir the chunks into the stew. Be sure to leave enough of a ‘wall’ and bottom in the pumpkin shell so it is a sturdy bowl. In the photo above, I scooped out a little too much and my pumpkin bowl started to get a bit weak. STEP 6
Fill the pumpkins with the stew mixture, then place the lids on top. Keep any leftover stew warm to serve in a bowl. Put the filled pumpkins in a baking dish, preferably with a lid, or cover them with foil. Bake until the pumpkins and stew are piping hot, about 30 minutes. Serve warm. (I garnished mine with a few extra chopped pecans.) How festive would these little suckers be for Thanksgiving?! Even if I wasn’t vegan, I’d take this dish over turkey any day!

Stay tuned for Pumpkin Spice Turnovers, another Big Vegan recipe that I will be testing soon ;)